The holding. What is it and why do I need it?

In this article we will thoroughly explain you everything about the dutch holding and when you should consider setting one up.

A holding company: it might sound either very spectacular or rather frightening. In fact it’s just a regular BV. But indeed, there is a special element which can make this construction very attractive. We all know those big multinationals consisting of many holdings. That’s not without a reason. I hear you thinking “but I’m far away from being a multinational, it’s probably not suitable for me”. You couldn’t be more wrong. In fact, every entrepreneur - no matter the company size - should consider a holding company. Read further below to find out if it would serve a purpose for you and how you should approach this.

What does it mean?

What are the advantages

Spreading risks is one of the main reasons for structuring your business with a holding company. A BV has limited liability. In theory that means that you - as an entrepreneur - are not personally liable for the debts of your business. Setting up a holding ensures that there is an extra layer between you and your BV. Important and valuable assets such as financial instruments or intellectual property can be transferred to the holding BV. By separating the assets from the activities, the assets in the holding BV are protected against financial and business risks and losses.

James is thinking about opening an Italian restaurant and would like to do so through a BV. To run the restaurant successfully, he naturally needs assets. Especially the pizza ovens and the property are quite expensive. He expects his restaurant to run well, but still wants to minimize his personal risks. He decides to set up a holding. He will hold all the shares in the holding while the holding holds all the shares in the operating BV. After a few years the restaurant barely has guests anymore and there’s no money to pay the bills. Luckily, the most important assets are safely held by the holding company, and leased to the operating company. When the operating company goes bankrupt, the holding still owns the important assets and James can, after he has dealt with his business loss, decide to start another operating BV.

Incorporating a company in the Netherlands? 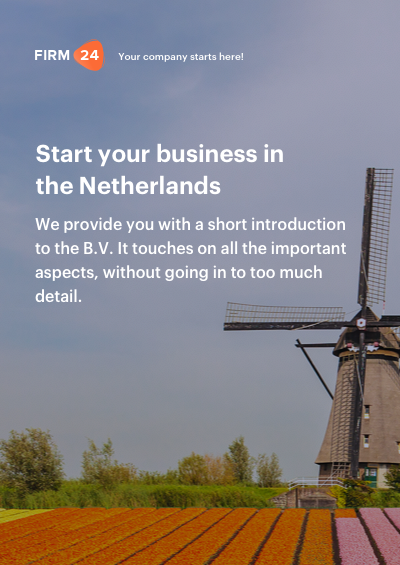 The so-called “participation exemption” is a Dutch tax exemption for dividends and capital gains arising from the sale of shares. The main condition that needs to be met is that the holding BV owns at least 5% of the shares. If this is the case, all dividends and capital gains are received in the holding tax-free. If no holding exists, all profits are directly paid out to the shareholder in person. That means income tax needs to be paid over those profits. Having a holding “in between” thus prevents your profits from being double taxed. The result is more cash in you holding that you can use for further investments.

Another major advantage of a holding BV is the possibility of a mortgage loan from the holding BV to yourself. Instead of paying interest to the bank, you’ll pay interest to your holding BV. The interest is taxed at the holding for 20% or 25%, while the interest payments are deductible from your personal taxable income. Instead of paying monthly interest to the bank, perhaps over €100,000 in total, you pay this interest to your own holding company and can keep the money for other expenses. These are only a few examples of why having a holding structure is a good idea for almost every entrepreneur.

It’s indeed possible to set up a holding company later, after having incorporated your operating company first. But this is financially unwise. When you decide to form a holding at a later time, you must transfer the shares you hold in person to the holding company. This entails additional notarial costs starting at € 650 ex VAT. Those shares must be transferred for a real value which means that a “symbolic price”of € 1 will not be accepted by the notary. This also means you need a valuation report from an accountant. The price you receive for these shares is, again, subject to personal income taxation, This can be postponed again by means of a share merger (only with a 51% interest) but this causes extra notarial costs of at least € 1,250 ex VAT. In addition, it is absolutely advisable to hire a tax advisor for this. A request must be coordinated with the Tax Authorities and tax documents must be drawn up. The creation and advice will cost you at least € 2,000 ex VAT. They say that all good comes to those who wait, but they clearly didn’t have the Dutch holding structure in mind when they came up with those words of wisdom!

Have a look at our other articles: